If you feel your safety is threatened, you can quickly exit this website by pressing the Escape key or clicking the X in the bottom right-hand corner.

The Soul of Alternatives For Girls: Thanks to a grant and the help of local artists, the after-school program creates new mural to reflect the soul of AFG 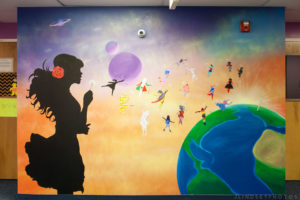 This month, the girls in AFG’s After-School Program completed a new mural inside of AFG’s building with the help of local artists, Julianne Lindsey and Elton Monroy Duran. The mural was made possible by the Michigan Council for Arts and Cultural Affairs, Corpus Art Inc., Culture Source, and the NEA.

Over the course of a few months, Julianne and Elton worked with the girls to come up with an idea for the mural. During the process, the group visited other nearby murals, like the one at E&L Supermercado in southwest Detroit, to gather inspiration.

“We came up with the idea as a group, and we wanted to include the different cultures of girls all over the world,” shared Ahtziri, one of the young women who worked on the project. The mural is meant to represent the soul of AFG. The mural shows that at AFG, girls and young women learn and grow, and AFG helps to support them as they continue their journey in the world, sharing their dreams, culture, and experiences everywhere they go. Just as a dandelion spreads its seeds in the wind. 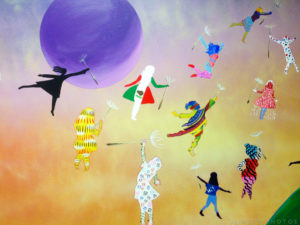 “Creating the idea for the mural was my favorite part of the project,” shares Jenny, another young woman who helped with the mural. “I liked how all of the different backgrounds we wanted to include were made into one.”

Once they settled on their idea, Julianne and Elton worked to put the girls’ vision to life, helping them choose a background, a color scheme, and outlines for the images. After Elton completed the majority of the mural’s background, the girls helped complete the mural by painting small images of girls floating down to earth. Each image was inspired by the culture, experiences, and role models of the girls who worked on the project. “My favorite part of the project was painting the mural,” Ahtziri recalls. “I liked being able to express my culture in the girl that I painted.”

Alternatives For Girls would like to thank Julianne Lindsey, Elton Monroy Duran, Michigan Council for Arts and Cultural Affairs, Corpus Art Inc., Culture Source, and the NEA for this wonderful opportunity!

If you or someone you know needs help:

If you or someone you know needs help: